As many of you know, I am a Certified Nutritional Counselor & Health Specialist.  What you may not know is that I am a Certified Biblical Health Coach too.  I believe that we are not only just a physical body, but a spiritual one as well.  In this blog I write about health related topics, recipes, nutrition facts and Biblical truths.

Today is a Biblical truth. 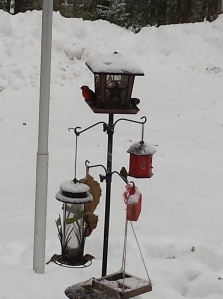 They do not hurry or worry.

I am sometimes so caught up in getting things done, that I fail to ask God for guidance.   I fall into the trap of being too busy, always on the go.  With the constant snowfall we are getting in New Hampshire, I am kind of forced to slow down.  It is good for my soul.

As I sit here and watch the birds in my feeder, especially my favorite, the red cardinal…I am reminded that they do not hurry and they do not worry.  They are provided for.  It is the same with us.

We have a Heavenly Father that has His eye focused on us, on you and on me. If we listen with our hearts and are in His Word…He promises to give us direction.

“I will instruct you and teach you in the way you should go;
I will counsel you with my loving eye on you”. Psalm 32:8New International Version (NIV)

We must align ourselves with His way, His perspective.  When I do this, time seems to slow down.  I get so much more accomplished.  I am not running around in crazy circles.  I am focused… Focused on Him. May you be blessed with His Counsel today.

The Heart of Worship 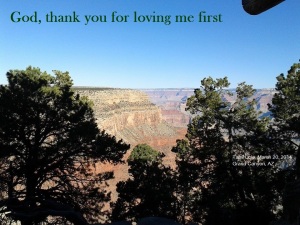 God, Your Majesty is Breath-taking!

Welcome to Day Ten!  At this stage in our journey, we are 1/4 of the way there!  Today is a touchy subject…one that in society’s thinking would say is unpopular and crazy.

We live in a day and age that says things like,

In this highly competitive world…Many think that surrender is bad…much like submission…seems like an unnatural thing to do, given the human spirit. Yielding to a stronger, more forceful person is what comes to my mind.  Maybe even thoughts of being a loser…defeated?  I am very independent and reading in Romans about surrender being the heart of worship…unsettled me…UNTIL I understood WHAT GOD means by surrender.

Do you dare to journey with me further?  Awesome!  Let’s continue.

When I think of surrender & trust I think of my Earthly Dad.  There were times that he told me to do things that I did not always want to do… things I needed to do…chores, homework, learning to drive, going to bed on time, getting a job…things that would help me through life.  I had to surrender my will to his, so that I could learn and have a better life.

It did not break my will.  Because my father loved me and I loved and trusted him, I surrendered knowing he was only looking out for me.  Could our Heavenly Father have the same purpose on a grander scale??

Let’s dig deeper…Most of us (myself included) don’t realize how much God loves us, we want to control our own lives and we misunderstand the meaning of surrender (I know I did)

Rick Warren says on page 78 of The Purpose Driven Life that there are 3 barriers that block our total surrender to God:

Fear: Can I Trust God? God will NOT force us to love Him…He does NOT break our will.  He LONGS for us to TRUST HIM WILLINGLY

Pride: We must learn to admit our limitations.  We aren’t God and NEVER will be. We are human.  According to A. W. Tozer, “The reason why many are still troubled, still seeking, still making little forward progress is because they haven’t yet come to the end of themselves.  We’re still trying to give orders, and interfering with God’s work within us”.

Confusion:  We misunderstand what it means to surrender.  We must rely on God to work things out instead of trying to manipulate others, force our own agenda, or control the situation.  Easier said than done, I know…

DAY TEN: THINKING ABOUT MY PURPOSE  (Taken directly from the “The Purpose Driven Life” by Pastor Rick Warren, page 84)

“TODAY’S FOCUS:  The Heart of Worship

POINT TO PONDER:  The Heart of Worship is Surrender

BIBLE VERSE:  ”Surrender your whole being to be used for righteous purposes.” Romans 6:13b (TEV)

QUESTION TO PONDER:  What area of my life am I holding back from God?

Here are the treasures I found from DAY TEN:

God looks at the attitude of my heart.  He asks me, “Is pleasing Me your deepest desire?” If my answer is truly Yes, then I will desire to follow Him and His ways.  To know that He wants what is BEST for me…to surrender because I LOVE & TRUST Him.  The funny thing is that when I feel that way about God and give Him His place as CENTER in my life…it does NOT feel like surrender, it feels like…PEACE.

My fun at a radio interview

Spreading the word that I am a Health Coach

“I recently had the opportunity and might I say, great pleasure, of being a guest on Absolute Broadcasting, LLC., a local radio station, WSMN 1590 AM, out of Nashua, NH”.

I happened upon Nicole Renelick and Joanne Randall at a networking meeting in Epsom NH at the Circle 9 Ranch and Campground.  Nicole was telling the group all about a great opportunity to be on live radio.  Needless to say, being a bit of a showman myself, I was curious.  We exchanged cards and I found her on Facebook.  It was a few more weeks before I actually got the nerve to do anything.  I was on FB one morning and Nicole was on too…we chatted and then I had her call me.  She gave me more information about the actual show I would be on…it is NH Women in Business and is hosted by Joanne Randall, who also owns Leap Year Marketing.

I set up an appointment to be on in a couple of weeks…date set for Friday, July 13 at 11:00 a.m.  The show runs for an hour, but with the commercials and station breaks…actually talk time is about 48 minutes.  Could I find enough to say?  Would I freeze and get tongue tied?  Lots of fears and “what ifs” crossed my mind and continued to be in the forefront of my thoughts for the next two weeks as I prepared my cue cards and researched areas I wanted to speak on.  I was excited and nervous.

I was also worried if I could find the studio.  Now I am not afraid of driving and I can MapQuest and get directions, but again, some of those fears raised their ugly heads…what if i get lost?  What if I get there too late?

Well, I am happy to say I drove almost right to the station.  I gave myself just over an hour to find the station. It is a 45 minute ride from my house.  I did not want to be late.  It was heading onto 10:40 when I pulled into the parking spot.   5 more minutes to get to where I needed to be.

I stopped just one time when I was close to my destination and asked a guy on the sidewalk where Main Street was.  He said I was on it.  Yay!   I asked where 149 was, he said right down the street.

I went past the station on purpose because it was on the other side of the street, turned around at the next intersection and found a spot to park.  Nicole had told me ahead of time to bring quarters for the meter.  Maximum parking is 90 minutes at a cost of 25 cents per 15 minutes. I fed the meter to the max.  I had 15 minutes to spare when I was done…so great timing!

I was given clear instructions on the signage and where to go once I was in the building.  I met up with Joanne.  I had taken 2 AIM Composure  (a combination of natural herbs) to calm my nerves.

Naturally relaxes me without the groggy jittery side effects

I was a bit frazzled, having thought I was late, but with the Composure working and Joanne giving me a hug and assuring me that I was right on time, I knew I would be fine. I arrived at 10:45 exactly! Joanne chatted with me for a few minutes and put me totally at ease.

I was afraid I wouldn’t have enough to talk about or would get too emotional when I was talking about my Dad and how I came up with  my business name (with God’s prompting).  She said not to worry, she would step in if things got tough,but she again assured me that I would be fine.

The interview started and for the first few minutes, I was nervous.  When I listened to the recorded broadcast, I counted over 20 times, I said “um” in those few minutes.  I need to work on that!  By the second segment, I was fine…even able to joke and relax.

I made up some cue cards to help keep me ontrack during the interview…not to read from ,but to use as reference.  I stuck pretty close to my plan, but still spoke from my heart and not from following a script.

Having a BLAST doing radio!

By the third segment, I was having a blast!  I couldn’t believe it when we were at the one minute to end mark!  Joanne was professional and friendly.  She promoted my business name, web address and contact information several times and prompted me to talk about those topics I wanted to cover about who I am, what I do and what services I offer.

Since this radio show is called “NH Women in Business”, I would suggest to any woman wanting to promote their business to look into this avenue.  The cost at the time I did it was $100.00 for the hour.  In return, you receieve a podcast of the session to post on your web page, Face Book and other social media.  You also get a QR code to put on business cards and other promotioanl materials and a LOT of FUN!

I had so much fun, I am considering doing a health segment…if I can come up with sponsors and people to be on a show that I would host, talking about health related topics.  I guess we will just have to see where the Lord will take me!